In our never-ending quest to put beer back at the head of the table, we recently talked with Chef Joseph Raney of Skogen Kitchen about Lord Grizzly Scotch Ale and asked him how he would use it in a dish.

Lord Grizzly’s a big, malty beer that can stand up to big cuts of meat like no other. It brings a depth of flavor to short ribs you’ll be drooling to devour.  The caramelization of the meat resonates with the sweetness of Scotch Ale and brings out the beer’s hints of roasted malt, making it an eerily good pairing.

Good food — along with good beer — is a labor of love, and this recipe requires some hours in the oven to tenderize the ribs. But that gives you plenty of time to finish the Lord Grizzly that didn’t end up in the braising liquid. Just sayin.’

For some of the best food you can find in the Black Hills, visit Skogen Kitchen in Custer, South Dakota. Tell ’em Lord Grizzly sent ya. 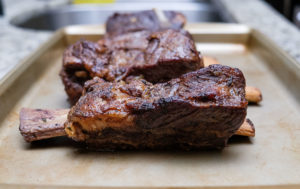 Coat a large cast iron pan with canola oil, and heat until the oil begins to smoke. Generously season the short ribs with kosher salt, and then add the ribs to the cast iron pan.

Sear until they’re a deep brown color on all sides but not burnt. Remove the short ribs from the pan. Then, place them into a braising pan. A slow cooker will also work.

In the same cast iron pan, roast carrots and onions until they’re brown. Then, add tomato paste and roast for a minute more. Add Lord Grizzly and reduce about half way. Add mixture to short ribs. Then, add whole garlic cloves, thyme sprigs, and shallots to the same braising pot.

Pour cold veal stock or chicken stock over the mixture until completely submerged and about an inch from filling the braising pot. Tightly cover with foil and place the lid on the braising pan or slow cooker so no steam can escape.

Once it’s finished, chill in an ice bath until cool. After the short ribs are cool, separate from the juice.

Strain the juice, bring it to a simmer, and reduce about half way. Add the juice to the pan with ribs and place in a 400-degree oven. Baste the ribs with juice every 5 minutes for about 25 minutes until the ribs are sticky and shiny.

In large pot, bring potatoes to a boil, and then, turn down to a slow simmer. Boil potatoes until they’re soft. Do not boil passed doneness or let done potatoes sit in the water once they’re done.

Heat milk until it’s hot but not boiling.

Strain potatoes and put in a food processor. Add butter and mix. Add hot milk until the potatoes reach your desired thickness. (You don’t have to use all of the milk.)

Place sauce from the ribs on the plate first, and then, place a couple scoops of mash on top of the sauce. Place the short ribs on top. Finish with some minced chives, if desired.