Posted On February 8, 2019In Recipeby admin

Now that we’re a couple months into the new year, it’s possible you’ve already realized the futility of most resolutions. Or perhaps you think that somehow, eating healthy and still enjoying craft beer are mutually exclusive.

Regardless, Chef Daniel Voorhees of Rustic Cuisine will open your eyes – and palate — with his Baby Kale and Toasted Walnut Salad recipe. 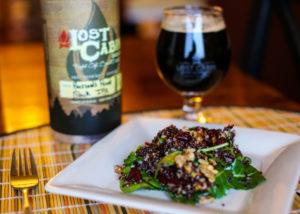 Kale gets a bad rap as being essentially a glorified garnish that’s somehow become the staple of hipsters and pretentious vegans. But in Chef Dan’s capable hands – and paired with his recommendation of Buzzard’s Roost – you’re gonna eat healthy without even knowing it.

Chef Daniel is a Black Hills native who attended Culinary School of the Rockies, now Auguste Escoffier School of Culinary Arts. In addition to running Rustic Cuisine, where he and his wife, Alexa, will come to your home and prepare a menu of based on your flavor profile, he’s also the Executive Chef at Black Hills Surgical Hospital.

According to Chef Dan, “I chose to pair [this recipe] with the Buzzard’s Roost. It has a high alcohol content that works great to cleanse the palette and enhance flavors. … I think the toasted nut, as well as the slight bitterness of the kale, will accent the beer quite nicely.” 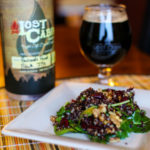