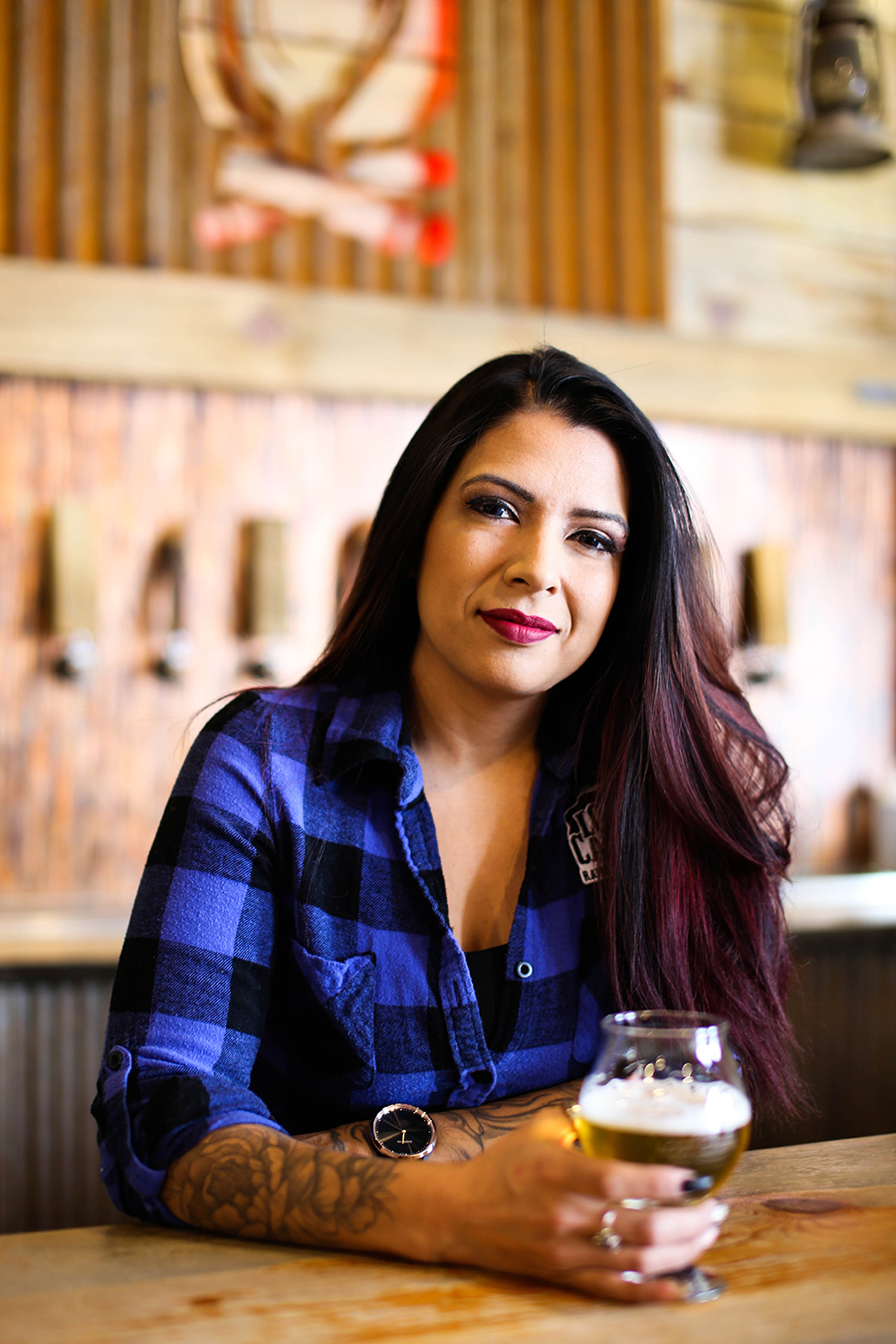 Adrienne has been a staple of our taproom since opening in 2016. Not only is she a co-owner of Lost Cabin, but she also owns/works as an esthetician at Society Beauty Company here in Rapid City, is a mother of 3, and has to keep her husband Jesse in line (a serious feat). When she isn’t pouring beers or making people look like models, she can be found tending to her massive plant collection, crushing the slopes on her snowboard, traveling with her family or making our chalk board look beautiful. 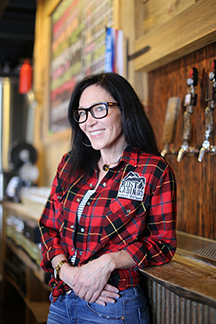 Lisa — also known as “Tuesday Night Lisa” or just “Nelson" (her wrestling moves are on point) — is many of our regulars’ favorite beertender. She’s also a yoga instructor, avid paddle boarder, hiker, camper, and mother of 3 (plus her dog Hudson). Lisa enjoys travelling the country to places where no one knows her name so she can cut loose and dance to Lana Del Rey. When she isn’t getting her groove on, Lisa is working on her house to make it the cutest abode on the block. 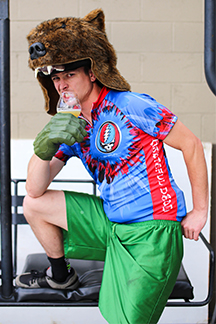 “Normal” is not a word that comes to mind when thinking of Cyril, or “Shadowboxer” as he is known in the brewery. He does plenty of normal things like ripping trails on his bike, shredding gnar on the slopes, smoking the dankest meats/cheeses, or boogying down at music festivals, but he will do it wearing one of his many costumes (pimp/astronaut, t-rex onesie, etc.) When he isn’t tending to our canning line, Cyril is reading HST, cuddling his 2 dogs and cat, or composing his next didgeridoo solo for his band “The Butt Flutes”. You’ll never know where the night will take you when you party with Cyril. You’ve been warned. 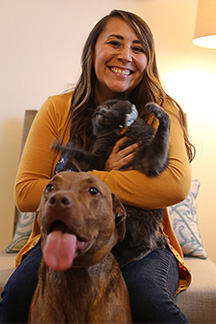 When Carmen isn’t serving up brews, she spends her time reading obscure science facts on the internet, running, hiking, training her dog Oliver, avoiding the teeth of her cat Hendrix, or dreaming of the return of Red Wine Barrel-Aged Lord Grizzly. She also keeps the youth of today informed on everything STEM related, and tutors kids with dyslexia. Working 3 jobs keeps Carmen pretty busy, but she still finds time for the finer things in life like young adult novels, blues inspired tunes, and nightmare inducing horror movies with the lights turned off. 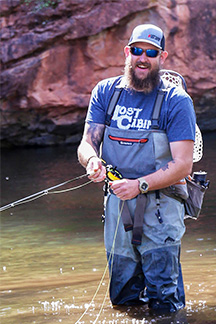 Grant splits his time between the back of house and front of house either scrubbing tanks and kegs or serving up tasty brews in our taproom. He likes his IPA’s like he likes his metal. Black. Grant is an avid fan of extreme underground music including grindcore, death, black, and doom metal, he even writes his own shreddy riffs and has performed locally in one of his many bands over the years. When he isn’t caressing his fretboard, Grant is studying environmental science and controlled environment agriculture at WDT, or hanging out with his Parson Terrier named Wrex.

Logan aka Hulk Logan aka Kenny Logans has hands down, the best mullet of anyone on our staff. When he isn’t tending to his luscious locks or serving tasty brews to you and yours, he can be found in his natural habitat either spinning records, building computers, playing video games, or dominating unsuspecting victims with his Magic the Gathering decks. Old horror/thriller movies often fill his TV screen while he hangs out with his wife and cat. 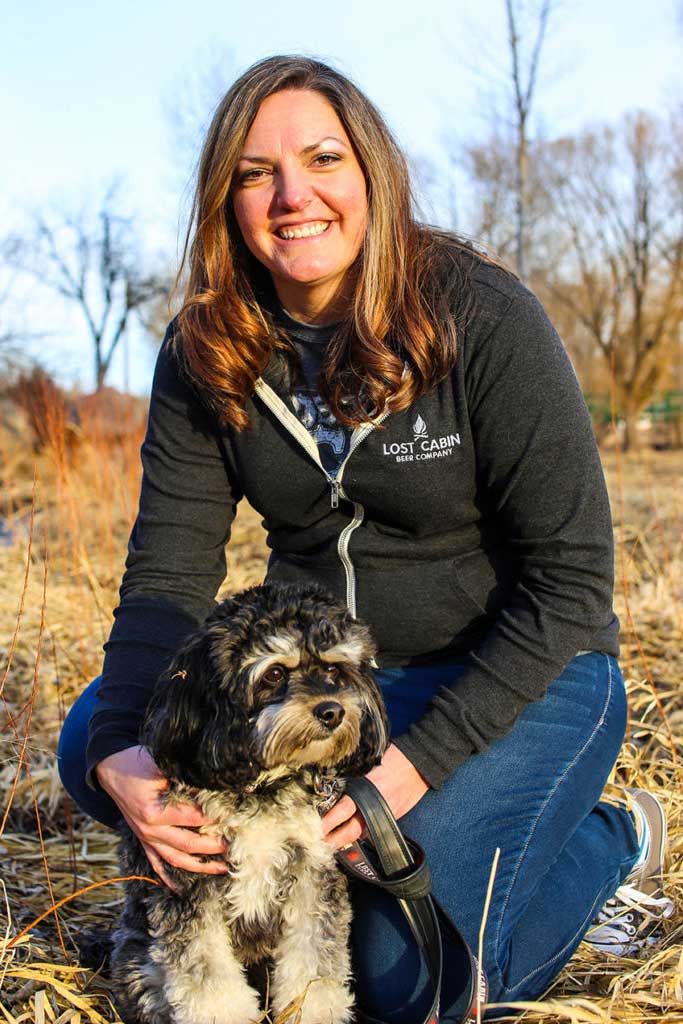 As Office Manager, Becky Sanderson — aka "HR" or "REbecky" — is the machinery that keeps Lost Cabin sailing smoothly ... as long as it's not on a Friday. She juggles Excel, QuickBooks, corporate filing, whatever else we don’t know how to do, and most importantly, making sure we get paid! When she isn’t shuffling papers, Becky is kayaking, reading, losing to one of her kids in cribbage, hanging with her hubby, or cuddling her dog Oscar. Becky is also a true crime/Star Wars/LOTR fiend, and like most of our crew, she kicks up some dust every time a good bluegrass tune comes on. 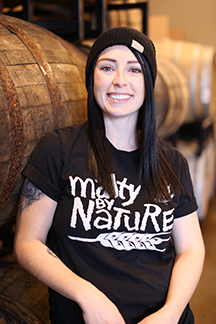 Megan, sometimes known as “Megatron”, occupies her time making schedules, training beertenders, and laying down the law when it comes to SOP’s. When she isn’t helping out around the taproom, she can be seen in the wild doing a number of various activities. From making botanical concoctions, baking the best bread this side of the Rockies, traveling the world with her husband, talking to plants, or cuddling her mutt Hazel, Megan does it all. She is also one of the remaining members of the old guard that are “nu metal” fans, but she gets down to indie folk rock as well. Don’t get her on a Lord Huron kick because it won’t stop.

Assistant Brewer/Jim of All Trades

Jim aka “Jimothy”, “Jimmy, the boy from Pringle-town”, or just “James” when he’s feeling classy is a man of many talents. A handyman by trade, and an employee by force, Jim is one of our go-to guys for fixing that leaky faucet, redoing our floors, and anything else we don’t know how (or don’t want) to do. When he isn’t fixing everything we break, he stays busy chasing after his two sons. Few things are known about this mysterious man, but we do know that his chin can grow more hair than his head, his go-to karaoke song is Night Moves, and he absolutely loves cheeseburgers more than anyone we’ve ever met.

Jesse Scheitler can be found toiling away at his laptop designing our website, making all that sweet, sweet Lost Cabin merch, and keeping up to date with all you fine folks on our social media. With a background in bar/restaurant management, and an affinity for homebrewing, the pipedream of starting a brewery became a reality in 2016. In between writing up business plans and brand building, Jesse’s doing the family thing with his wife Adrienne, 3 kids, and Gizmo, his cat. He also enjoys snowboarding the freshest powder, biking, spinning records, attending shows, or cooking with his bougie kitchen appliances.

Rachel is the nicest New Yorker you’ll ever meet! Originally from Georgia, this girl loves all things travel related. She moved to Rapid City in 2020 just so she could be closer to the Badlands and the Black Hills. When she isn’t out hiking or going on road trips with her dog Princess Leia, she can be found nerding out to Star Wars, Harry Potter, or Game of Thrones. Want to know what Hogwarts house you’re in? Rachel is your gal. Like most of us Cabin folk, Rachel is a sucker for live music, and has spent quite a bit of time jamming out at punk/rock music venues around the country.

Hanje is not only an assistant brewer here at Lost Cabin, she is also a picnic/bubble bath/embroidery aficionado. When she isn’t cleaning brewing equipment or eating sandwiches, she’s crushing on Macaulay Culkin, collecting bones (hopefully not human, but we haven’t asked yet), rocking the newest fanny packs, or appreciating geometric art. Hanje is a hard pass on long walks on the beach, and you can skip the flowers, because she doesn’t find them romantic. Catch her hiking with her dog Caulker or find her in the taproom enjoying a SoDank. She would love to tell you about her favorite Guy Fieri recipe, or talk about the cinematic intricacies of Rambo.

Casey Kraulik was the first ever Lost Cabin hire and is known by many names — Punisher, Jucinda, Berry Schmuckerberg and other names that we really shouldn't put on the internet. He’s taught school, worked in the oil fields, and served a beer or two in his time. When he’s not minding the mash, he’s hiking the Hills, woodworking in his shop, or travelling the country to seek out the tastiest riffs that live music has to offer. We are willing to bet he has seen Pearl Jam more times than you. When he isn't belting out Vedder ballads, you may find him cuddling his pups, Stella the Basset Hound, and LC a Mastiff/Pit mix. 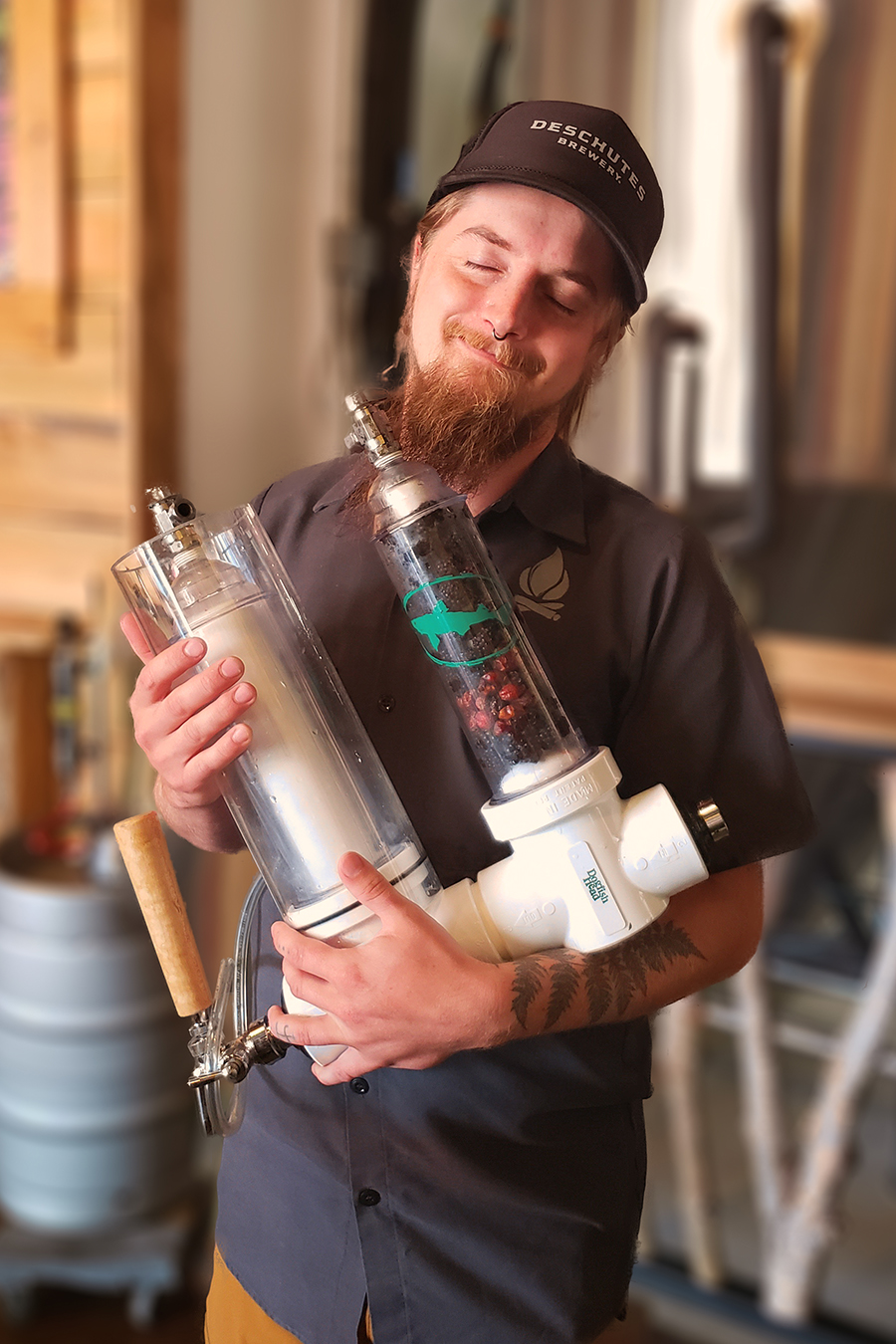 Ryan Messer splits his time between beertending, website maintenance, the joys of inventory management, and being the officially unofficial Lost Cabin union rep. He has a degree in Outdoor Education, has worked previously for the Audubon Society, and a vineyard in Oregon (he doesn't want any Merlot). His extra curricular activities are varied and eclectic and include hiking with his lady friend, Molly, and dogs Finn and Kylo, wearing out record needles, home brewing, cross stitching, and biking.

With age comes wisdom, so naturally Dave is pretty wise. Need to fix an airplane, plumb a water heater, and make some homebrew on the same day? Dave is your guy. When he isn’t building, cleaning, repairing, homebrewing, or smoking meats, Dave can be found in a local taproom enjoying a craft beer or a stiff drink, hanging out with his kids and wife, traversing the hills on his side by side, or installing some grandiose amenity for his house (he has a heated bidet you know). 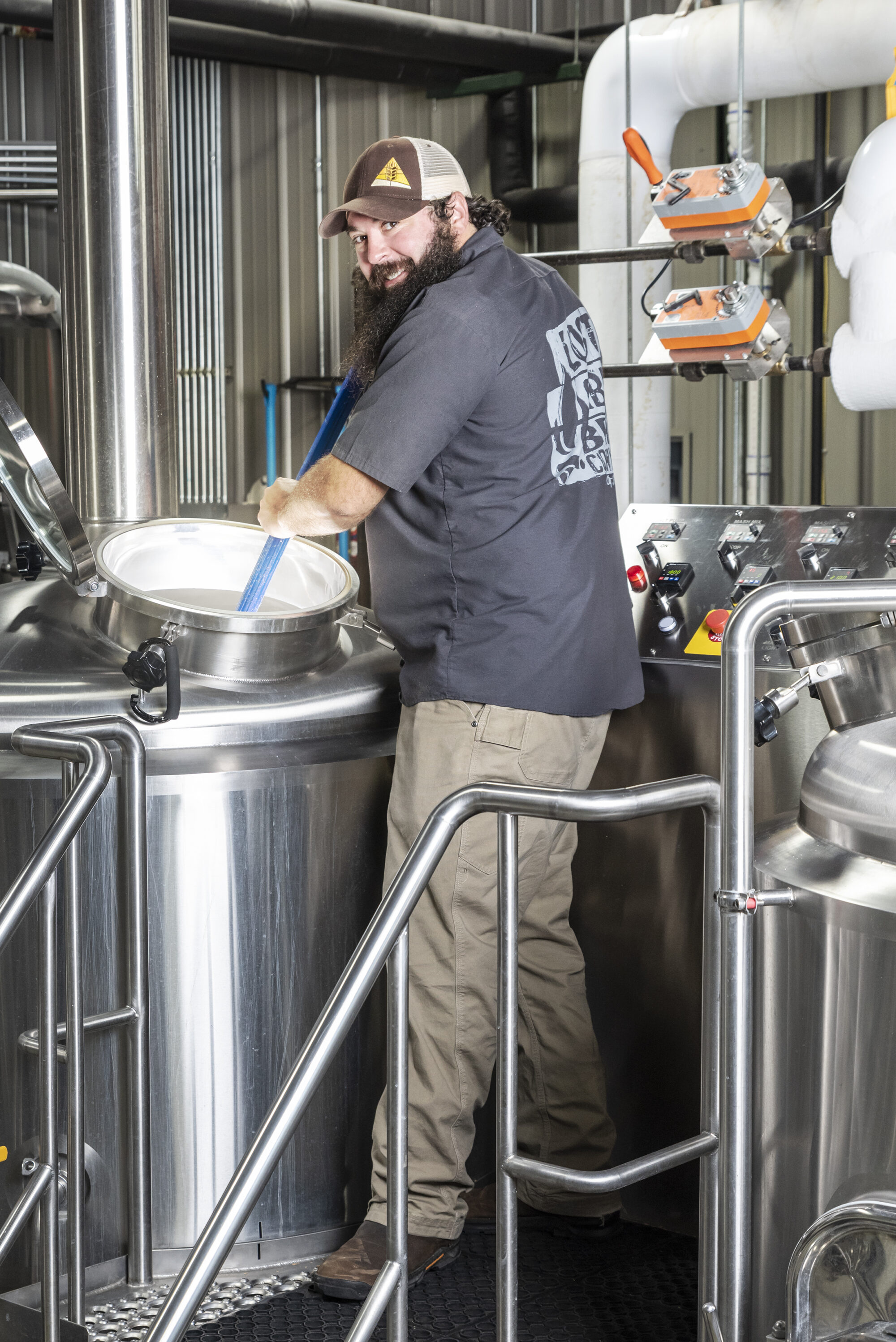 Tom has been co-owner and our head brewer from day one and has the beard to prove it. As the malt master, water wizard, yeast yodeler, recipe writer, and head hop handler, Tom is always coming up with a fresh new beer for your enjoyment. When he isn’t dreaming up the newest brews, Tom can be found somewhere outdoors with his wife Steph and two kids. From hunting to ice fishing to hiking, he loves the whole spectrum of activities the hills have to offer. He also has a strange affinity for zydeco music, so lock up your accordions if he’s ever in your neck of the woods.

When Whitney isn’t slinging beer and bringing cheer to customers, she spends her time writing about alien abduction, playing Magic the Gathering (modern rules only), or chillin’ with her husband, and cats Mordecai and Rigby. Before Lost Cabin, she was baking up all the goodies for nearly every coffee shop in town and is currently studying to become a nurse. We hope she is better with people than plants because she has never been able to keep one alive. Not every brewery has a resident Incubus expert, but we’ve found that in Whitney as well (we weren’t looking for one, it just happened). She is positive that aliens exist, that chocolate is overrated, and that horror/comedy is the best genre for movies.

As one of our four co-owners, Steph has been here since day one. As a veteran bar gal, it was an easy transition to be one of the first Lost Cabin beertenders, but it didn’t take long to realize that her skills were better suited to make sure the fun-o-meter was tipping the scales daily. All the crazy events we throw in the taproom and statewide are all thanks to Steph’s party-oriented brain. When she isn’t prepping for the next event, Steph can be found chasing storms, reading palms, raising her 2 kids (and sometimes her husband Tom), hunting for the best bargain deals, and feeding squirrels. You never know where the night will lead you when you party down with Steph.